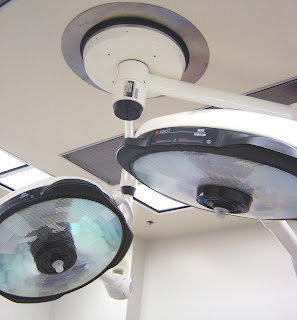 I was driving to the hospital this morning feeling very happy. After waiting a long time I was finally on my way to the OR to observe surgeries. Ever since my clinical in surgery I had been dreaming of observing surgeries at the local hospital in my home town during the summer... now it was happening!

Once I had changed into scrubs I followed Robin, the charge nurse, into the area where patients were being prepped for surgery. I had no qualms or jitters, only nervous excitement! As we ducked around some curtains I saw a CRNA bent over a lady's right shoulder area. He was attempting to administer a Scalene Block. Not fully understanding what was going on I cautiously peered around the anesthetist trying to get a better view. Ever so slowly and methodically he was probing her shoulder with a large needle which was delivering mild electrical shocks. The idea was that when he hit the right nerve her hand would begin to twitch up and down. First her stomach jumped for awhile and then finally her hand jolted. Bingo.

I was facinated by this process, although slightly concerned at the pain the lady might be experiencing. The probing needle part did not look comfortable. All of the sudden it felt as if someone had turned the thermostat up to 100 F. I became increasingly aware of a strange feeling in my legs and head. Feeling clammy and slightly nauseous from the heat I wondered silently how these people could put up with such a stifling temperature. For a while I stoically stood there willing myself to remain upright in hopes the feeling would pass. With every second my head felt more swimmy, my eyes refused to focus and my knees threatened to crumple out from under me. "Surely I'm not going to faint?!" I thought to myself "this is ridiculous!" I remembered that nursing instructors had told us to squat down if we even felt woozy. Hoping not to attract attention to myself I nonchalantly squatted down for a few seconds, hoping to be miraculously cured. When I straightened up I realized that no miraculous cure had occurred. In fact it became clear that unless I found a seat immediately I would soon be laid out on the floor. "Is there somewhere I could sit down?" I ask quietly. Gratefully I sank into the seat Robin pointed out. By this time I felt like my head was now floating above my body and that the thermostat was at a sweltering 200 F. "You ok hun?" one nurse queried. "She looks white as a sheet don't she?" Robin interjected. "Now you just sit there, the bathrooms right there and I'm going to go get you a Sprite. Don't you move without you telling me alright?" With that she disappeared around the corner.

Half-heartedly I sipped the Sprite, but was more interested in holding the cold can to my burning face. "What is happening to me?" I wondered as I leaned forward shakily, willing my foggy head to clear. "My dear!! you're diaphoretic!" exclaimed one nurse as she pressed a cold towel to my slippery forehead. Looking down I noticed my scrubs looked as if they had been hit by a large water balloon. The sweet nurses wheeled in a hospital bed for me to lay down on. You cannot imagine how sheepish I felt laying there in the OR Recovery Unit. I wished I could melt into the floor... physically I felt like I was about to get my wish.

Only after I had downed about half of my Sprite did I begin to come back into the land of the living. And then and only then did I begin to see the amusing aspect of the situation! Thankfully the rest of my OR experience went off without a hitch. I was able to observe a colonoscopy, shoulder scope - rotator cuff repair, knee arthroscopy and i&d (irrigation & debridement) of an knee with cellulitis. All in all it was an excellent experience.
Posted by Heather at 3:15 PM 2 comments: 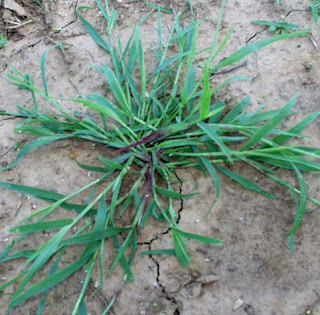 Seldom does something cause me to be violent and aggressive. I am not one that can kill a thing without thinking twice. In fact I have been known to take pity on mice, rats, snakes, spiders and all manner of pesky or dangerous wild-life. It is not in my nature to hurt or destroy...but I have found one exception. There is one thing on which I will take no pity and have no mercy! I attack it will a vengeance unmitigated. Determinedly I assail it with a shovel, even fighting it with my own bare (yet gloved) hands until I have finished it off once and for all!! I will not rest until it is cut off from all life support and hurled into the trash!!!

What is this horrid thing you ask?...


CRABGRASS
Posted by Heather at 3:17 PM No comments: